Four mornings I’ve set the alarm for 5:30 so that we could go up to the Blue Ridge Parkway to take some sunrise pictures. Four mornings I’ve been disappointed—either no clouds whatsoever or so cloudy I couldn’t see the mountains from our house. I need something between the two extremes. But getting up that early gives me a good reason for taking a nap in the afternoon. :)

After Bubba and Tommy went for a walk and we all had breakfast, we decided to go ahead for a drive on the parkway. It was a very hazy morning so I did not get any good pictures.

This is Daisy Fleabane that was blooming all up and down the Parkway. This plant was once used to repel fleas. 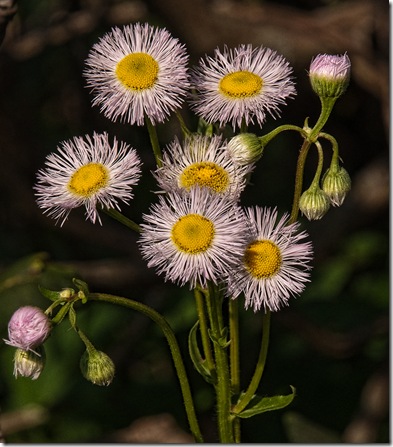 When we got back home we hiked up to the top of the trail behind us to take pictures of some Flame (or Native) Azalea. As I was taking pictures there we heard some thunder and decided to head quickly back down to the house. We got rained on a little but soon after we got back to the house, the thunder really started booming.