We left home at 5:40 AM. As we’ve done in the past, we stopped at McDonald’s at I75 to get breakfast. It took forever to get our food. We’ve never had a problem with this place before.

When we got right outside of Nashville we hit quite a rainstorm and had to slow down to 35 MPH. It was unfortunate since traffic was light. According to the radar map we would be driving in rain for a while.

It sure was a dreary day but it’s easier on the eyes than having the sun shining brightly. 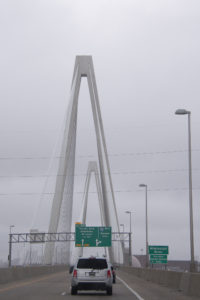 We arrived at the Drury Inn in St. Joe at 6:50 PM. It was 39 degrees with light rain. The forecast for the next day was iffy. After getting settled in, Tommy went to Bandana’s BBQ for our dinner. Their BBQ meat (we get chicken and pork) salads are really yummy!