I am no longer a soccer mom.

Yesterday Tommy and I bought me a new auto. The van’s driver’s side window was being held up with duct tape, the transmission was about to go and there were two chips in the windshield that were getting ready to make a big crack. It was time for me to get something new. The only thing I was adamant about was I wanted something that sits up higher than a normal car. I guess that was due to having driven two mini-vans and being a passenger in Tommy’s truck. I didn’t necessarily want another van and we didn’t need a lot of passenger space (other than for Bubba). So I started looking at smaller trucks. I looked at the Chevrolet Colorado, the Toyota Tacoma and the Nissan Frontier. While I was at the Chevrolet dealer (I made Anne go with me to look) I also looked at the Traverse and would have looked at the Equinox but they didn’t have one. Anne and I really liked the Traverse, but it was more money than I wanted to pay. I tried to find a dealership in our area that had an Equinox but came up empty. Evidently they are pretty popular.

Tommy and I wound up going to the Nissan and the Toyota dealerships to test drive their trucks. For the same amount of money I thought that the Colorado’s were pretty cheap. We really had no qualms about buying a Toyota but after all was said and done, we really liked the Nissan Frontier the best. So without further ado, here’s my new truck: 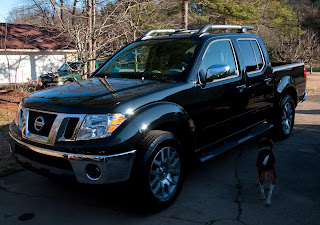 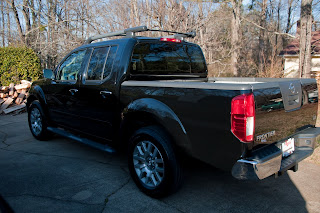 I love it! It’s very comfortable in the front which is where I’ll be 99.8% of the time. And it’s got some fancy bells and whistles.
It was a bit sad getting rid of the van. There’s lots of memories that go along with it. Many, many rides to soccer matches and visits to Darlington. It’s also the auto that took Amanda to Wyoming the very first time. Hall and I think he learned how to drive in the van. Many good memories. :)
But, no more soccer mom–I’m now an ole gray haired lady in a pickup truck.