Steamboat Springs here we come! Evan started out on his bike about 5:45 a.m. He was going to meet us in Walden. The rest of us got a later start. We were packing Amanda and Evan’s car and Tommy realized that one of the tires was low so we switched over to the truck. Because Evan was making good time and we were later starting, we actually caught up with him at the intersection of Highways 14 and 40 in Colorado. He decided he wanted to go ahead and ride into Steamboat Springs–a total of 122 miles! The last few miles was coming down from Rabbit Ears Pass at speeds up to 45 mph–on a bike. This reminded me of a story that my Uncle Bob told about when our family, including Uncle Bob, moved to southern California. On our way we stopped in Steamboat Springs to visit with my Uncle Don and Aunt Ellie. Uncle Bob said, “…my brakes overheated and I came down the Mt. at 55-75 MPH. I finally rolled to a stop about a half mile from the ranch. I got all sorts of dirty looks from the people I passed on the way down. But you know what, I couldn’t have cared less, I was still alive!” 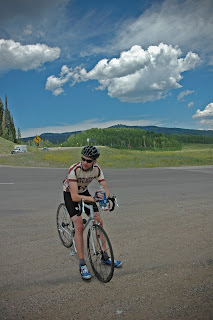 When we got into town I called my cousin Vikki as she was going to take us to Uncle Don’s house on the ranch to spend the night. We then went downtown for some lunch and shopping. I found this flower growing outside of a shop there. The thing I like about it is that it has a blue center. 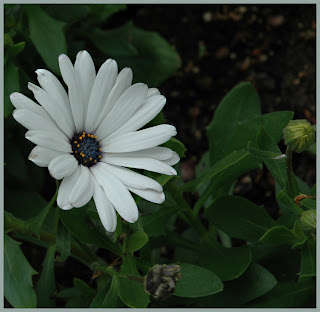 It’s kind of hard to be serious about shopping when you have this following you: 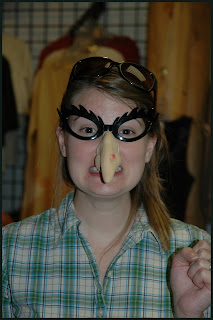 This is Uncle Don’s fishing hut. This is just to the side of his house and sits just yards away from the fishing pond. 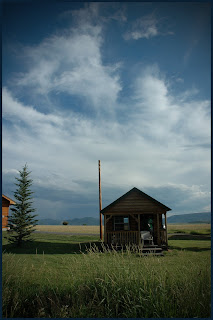