We left home Saturday morning early with no particular destination in mind. Our route was to drive up the Great Illinois River Road but we didn’t know how far we would go or where we would stay for the night. We started the River Road in Cairo, IL which looked at one time to have been a fairly prosperous little town. No longer. 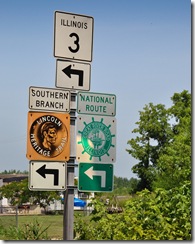 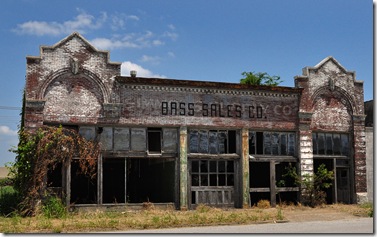 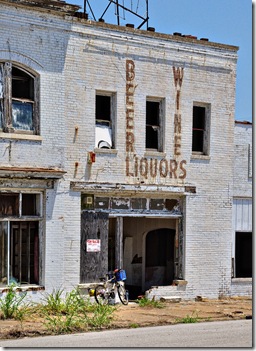 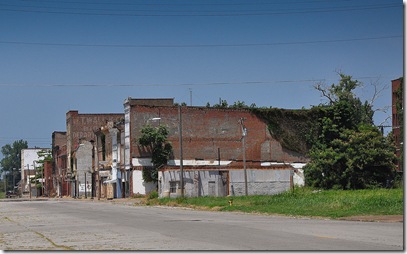 Along the way we stopped at Grand Tower for a picnic lunch. This was one of the few places that we were actually able to see the river. It was a nice little area but it sure was hot! 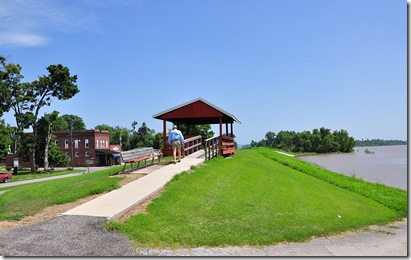 We passed through Chester, IL, which is the home of Popeye. Bet you didn’t know that! 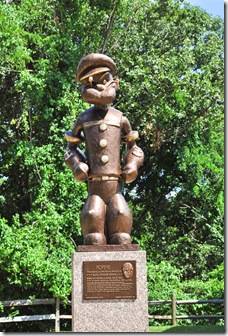 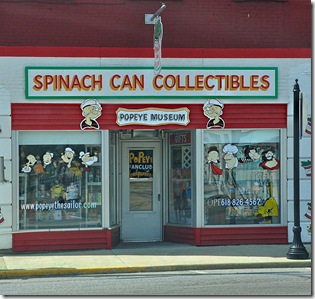 Tommy saw this mailbox and we had to turn around and go back to take pictures. You have to look closely, but the mailbox itself is on a pulley that goes up to the top of the hill. I don’t know if the person who lives there is lazy, safety conscious because they live on a “highway” or physically unable to get down the hill to retrieve their mail, but it looked to be ingenious! 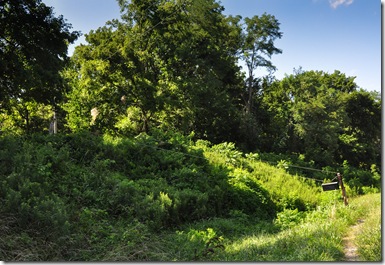 By the afternoon we needed to make a decision if we were going to continue on the River Road through St. Louis or head west. Since we hadn’t been too impressed with what we’d seen we thought we’d hit Highway 30 and go through Missouri and possibly spend the night in Jefferson City. Unfortunately we didn’t find hotels that allowed pets. No problem—we weren’t far from Columbia and a hotel we’d stayed at numerous times. So we headed north to Columbia and into a huge storm. We had to stop at a roadside park to make sure everything in the back of the truck was bagged up tight. 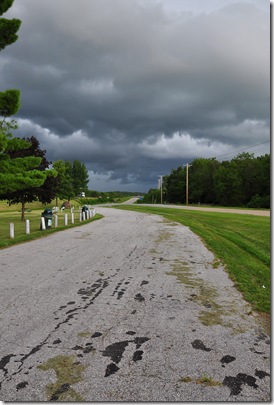 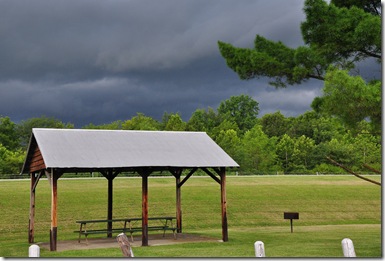 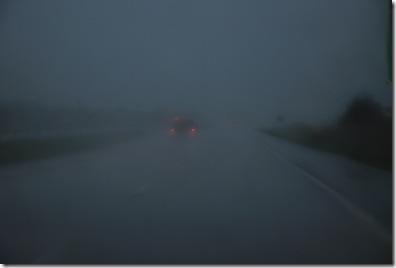 It was quite a storm and we saw lightning the likes of we’d never seen before. Wish I’d been able to capture it with the camera.

The hotel we normally stayed at was nowhere to be found—where did it go? No problem—Boonville was just 20 miles down the road and we’d stayed at the Comfort Inn there with Beau and Bubba. We continued on. Now it’s starting to get late and Tommy was pretty tired so we were really looking forward to stopping for the night. Well, that was not to be. The Comfort Inn was sold out and the guy there told us that he’d heard pretty much everything between Boonville and Kansas City was sold out. Not entirely believing him we continued on and stopped at a few hotels. They were sold out. We eventually got to St. Joseph at midnight and got the last room at the Days Inn. We were pooped! And sleeping on the 2” mattress didn’t help.