Skip to content
The day started out with us finding snow in the parking lot. As is our usual routine, we drove over to the Denny’s so I can order breakfast sandwiches to go while Tommy fills the truck with gas. 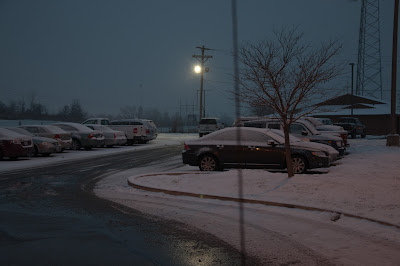 When we’d accomplished that, we hit the road and headed north on I29 into Iowa and then Nebraska. We travel just a short distance in Iowa before we cross over the Missouri River. It really looked cold: 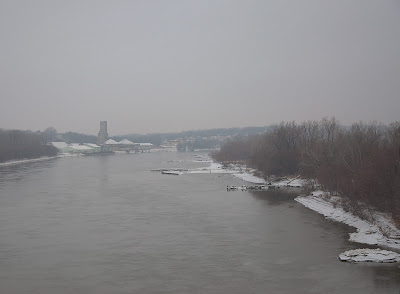 The route we normally take is Highway 2 from Nebraska City into Lincoln where we pick up I80 and head nearly straight west across Nebraska. I thought that Highway 2 might be a good place to look for barns in the snow. As I was looking on one side of the road, Tommy was looking at the other. All of a sudden he got excited about this cement truck and tried to explain what he’d seen. So we turned around and found this (some people are just so creative):

In case you can’t see it, that’s Santa at the top holding reins that go to the front of the truck. There are Christmas lights wrapped around the hopper (I think that’s what Tommy called it) and presents sliding down the chute. You’ve got to love folk art!
Heading on through Lincoln, or the suburbs of Lincoln, we finally reached I80. This is a good thing and a bad thing. The good thing is the speed limit is 75; the bad thing is it’s nearly 385 miles across Nebraska. There are a few sights to see while traveling on I80–this is not one of them: 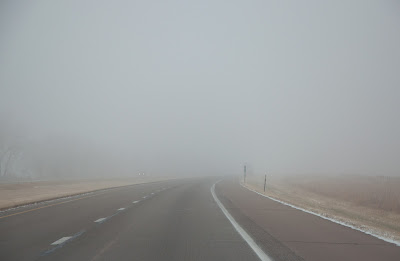 Smack in the middle of the state we were traveling in what looked like frozen fog. It didn’t really look like it was snowing, but you could see something coming down. Some of the trees along the side of the road were perfectly beautiful, but unfortunately we couldn’t stop for me to take pictures. We did get off on an exit to see if I could find some trees with the ice/snow on them. But wouldn’t you know it, the exit we took only had one tree although it had the extra red barn in the background. :) 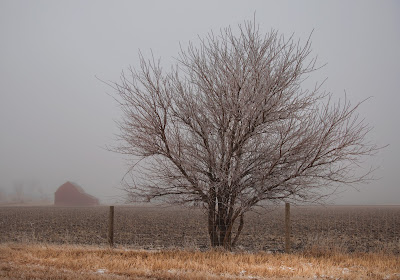 As I was walking back to the truck, I decided I needed a picture of what we look like driving some 1500 miles. Clampetts or not?? 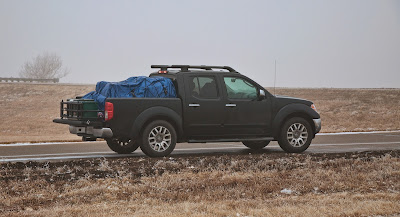 Along I80 is this really cool museum, the Great Platte River Road Archway Monument. You enter on the north side of I80 and while looking and reading the information included there, you cross over the interstate. You then circle back around and end up where you started. 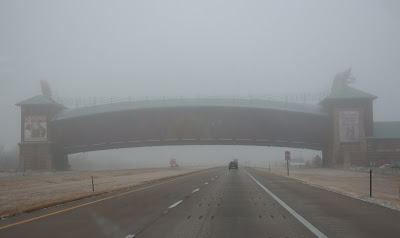 After stopping at Cabela’s in Sidney, NE we headed on into Laramie. Arrival time was about 6:45 p.m. EST. Tommy, Bubba and I were all glad to get out of the truck.