We were so excited to start our trip that we were ready to go on Friday about 2:00 p.m. The truck was packed and all we had to do to get going in the morning was get up, shower, dress and put the camera bag, laptops and Bubba in the back. We left the house about 6:30 a.m. which was just a bit earlier than normal.

The obligatory pictures of the Arch in St. Louis taken from a truck going about 60 mph: 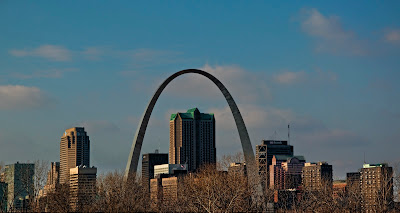 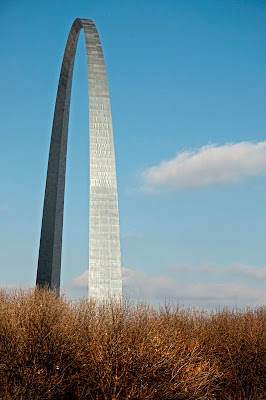 We saw this hot air balloon flying over Columbia, MO. It must have been really cold up in that balloon as the ground temperature was running 32-34. But the clouds behind him were awesome! 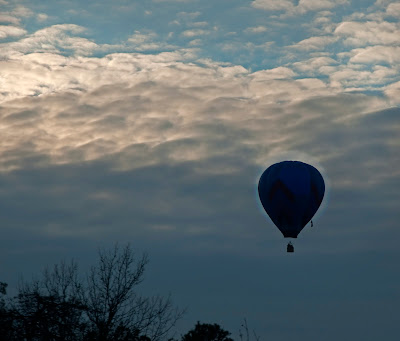 Our destination for the night was St. Joseph, MO. We were making pretty good time until we got about 15 miles south of town. It started snowing a bit and the road started freezing. Traffic slowed way down and eventually came to a full stop. Over two hours later we finally made it to our hotel–pooped and a bit stressed. While we were stopped at one point, people started getting out of their cars and talking to one another: 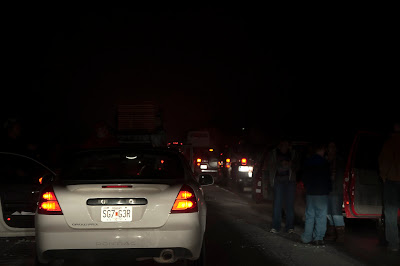 I never have quite understood how people get trapped in their cars during snowstorms. I thought all they had to do was keep driving. Well, now I understand a bit better. No one was moving or when we did, it was very slowly. We’re not quite sure what the hold up was–could have been the hill down then across a frozen bridge and then trying to make it up another hill. We saw no signs of an accident. The one good thing was we knew if we were stuck for a while we had a sleeping blanket, a snuggy, water, beer, Dr. Pepper and a Honey Baked Ham. We were in good shape. :)