Skip to content
Well, we had enough of the heat and traffic of home and decided to return to the mountains. We got to Balsam Grove around 1:30 today and it was in the mid 70’s. Lovely weather!
As we were enjoying a dinner on the deck, Bubba got stung by one or two yellowjackets. If it wasn’t so pitiful it would have been funny watching him. Poor thing ran in circles crying. After a few minutes of that he would go lay down. Then all of a sudden he’d get up and start chewing/scratching where he was stung and go a little wild. I finally gave him a Benadryl and he is snoozing now.
Yesterday I got some good news–my cholesterol has dropped quite a bit. I guess that goes with the weight I’ve lost.
Here’s a picture from last week when Anne, Cleg, George and Gracie came and visited: 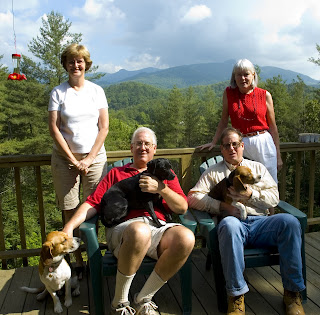 We came home yesterday to celebrate Fathers’ Day and to get a few things taken care of. We plan to head back to the hills probably on Friday. As we headed into Atlanta’s traffic and heat, we wondered what in the heck we were doing! Sunday afternoon I wore a sweatshirt. It was 56 degrees that morning and never got really warm.
I might get the camera out later today. We have some volunteer zinnias that are blooming and are pretty.
Not much else going on here. 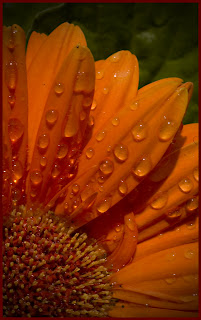 If things aren’t blooming so you can take pictures, go buy some flowers. These gerbera daisies looked so pretty when I stopped at Poppy’s in Brevard to buy steaks for dinner. So they were placed in the shopping cart!

Anne and Cleg came up yesterday to spend a couple of days with us. We had a great dinner of steaks (they were so big that Anne and I split one and neither of us finished ours), hash brown potatoes, salad and Anne’s pound cake. YUMMY!

We got up today and Tommy, Cleg and the dogs went for a walk. When they returned, we made French Toast and bacon for breakfast. Not having had enough of a walk earlier–and needing to walk off breakfast–Tommy, Cleg and the dogs went for another walk. They were gone for about an hour and returned right before the storm that came through.
For lunch Anne made chicken, cheese and pesto paninis. I ate only a bite, but they were delicious. Tonight’s dinner will be hamburgers and p 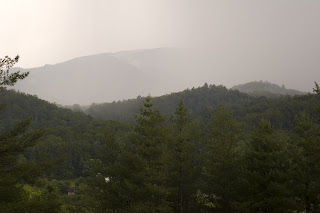 asta salad thanks to Anne. I feel like all we’re doing while they’re here is eating. 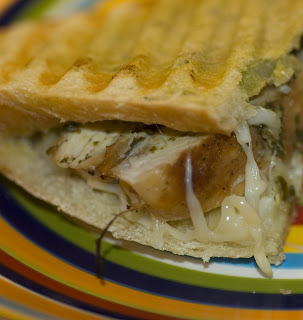 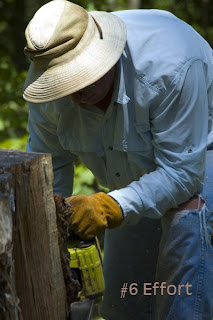 Today I decided to go into town. We needed a few things up here and I can always use a trip to Brevard. I went to WalMart and got some items. I then went to the scrapbook store and bought a magazine. Then I walked over to the outdoor shop to see what kind of Teva’s they had. Nothing cute so I headed back up the hill.
Today’s picture is of Tommy working on next fall’s firewood.

Please ignore the “#6 Effort”. I am participating in a photography challenge that has 26 different things to find for a photograph. I thought Effort was most appropriate for what Tommy was doing. We will certainly enjoy the firewood when it turns cold up here!

Not much going on here today. Tommy and Bubba took a long walk this morning. When they turned around to head back home, Bubba took off without Tommy. Although Bubba had been on a few walks, he had not been as far as they went this time. But, he hurried on home by himself and found his way. Good thing–if Tommy had come back without a puppy he would have been in big trouble!

I had planned on spending a lot of time practicing with my camera while we are here. Unfortunately, there’s not much to take pictures of. However, I did find this butterfly on one of the purple cone flowers that Tommy transplanted from home. 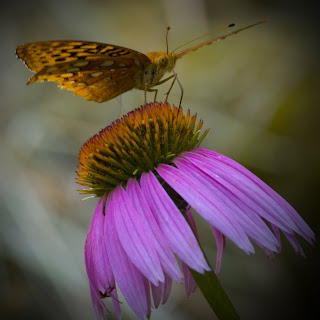 Hall came for dinner tonight. He wasn’t able to last night as he had to fix a water leak at the house. But, he did get his potato casserole!

It sure was nice getting to BG yesterday. We were so tired–I’m not sure why–that we decided we didn’t want to eat dinner.

During the night, we kept hearing what sounded like something scratching. Tommy got up and looked around. He found a big bug on the outside of the screen door that was trying to get in so we thought that was where the sound was coming from. We fell back to sleep but kept hearing the noise throughout the night. This morning we heard it again after we were wide awake. The sound was coming from a mouse that had gotten into the dustbuster in our bedroom. It was pretty funny watching Tommy opening the dustbuster to get rid of the mouse.
Tommy also realized this morning that someone had stolen our grill and our American flag. OK, if you need a grill, go ahead and take it. But why take someone’s flag? I don’t know why that bugs me so, but I’m pretty mad about it. Thankfully, we had another one to fly. When we leave to go home, the flag will be put inside the house.
It’s been a nice day here. The clouds have been coming from across the mountains all day long. It is a very nice 79 degrees. We’re hoping for some rain. Things are dry here.
There’s not much blooming here right now. I did take a few shots of some daisies on the side of the house. 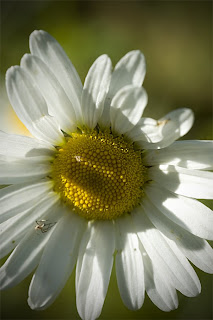 We’re looking forward to having Hall here for dinner tonight. I’ve promised to make him a Potato Casserole–that should guarantee that he shows up.

It was hot here–about 95 degrees. Too hot to do anything. I did go out and tried to get some photos of a butterfly on our butterfly weed bush. Apparently butterflies don’t like beagles around. So I came back inside and started packing for NC. Besides, the mosquitoes are terrible this year. Yuck!

Tommy and I drove up to Lake Lanier to let Bubba meet his cousins Gracie and George. When we got there Cleg and Anne took us for a boat ride.

Bubba was very vocal throughout the boat ride!

And for Amanda who loves to see Gracie wearing her life preserver:

Well, I’ve decided to go ahead and get this blog going. I’ve been thinking about doing it for some time and finally got Hall to set up the basics for me. There will probably be some formatting changes coming, but I have to figure out how to make them. Or I can wait until Hall has time.
We have some beautiful daylilies blooming now. 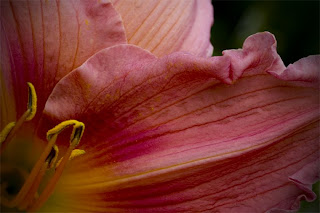 And, a beagle puppy picture for you: 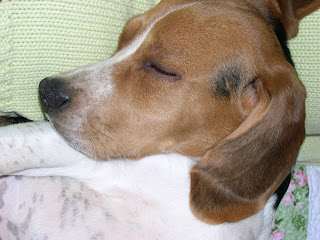